Ok, so here is my degree project that was done during 2010.

My proposal was to help to solve the housing problem in Brazil. The slums, poor comunities created in irregular areas, are a big social problem in Brazil and the people living there suffer a lot mainly with consequences from the rain, like floodings, land sliding and diseases. Remove these people to another places is not a good alternative because some social problems that created that slum are ignored. One of the reasons of the slums existence is because people need to live close to their jobs since public transport aren´t eficient in Brazil´s big cities, but living close to commercial areas is too much expensive.
So the best alternative is to improve the slums offering piped water, sanitation, eletricity and houses in better conditions. My proposal was to use the industrial bennefits to create cheap, light and resistant modular houses. At the same time was important to understand the slum´s way of life to project a product that would have a good acceptance. Nowadays, the houses in slums are built and projected by the owner of the house, creating a connection between house and owner and giving him the possibility to built a house the way he wants, with the size he wants respecting obviusly the space limits in slums. So the project needed to offer a freedom in construction (big personalization), a connection with the owner such as protect him from rain and the problems derived from rain. Because doesn´t exist laws in the slums constructions, the slums habitants needs to decide everything inside the community what creates strong relations between them, another important feature of the slums.
In the end, I decided to project a small module with 2.4 X 2.4 m that can be combined with other small modules to create a house. The number of modules you are going to earn is proporcional of the needs of space you have (members of the family). The materials used in the module are, steel, aluminium and a lot of wood, what makes the module cheap. The module is delivered in parts and the owner can built his own house, preserving the relation between the house and the owner. If your family gets bigger you can couple new parts to your house and create new rooms, what gives a big freedom to the family and a great dynamic to the entire community, with houses growing and decreasing following the changes in peoples lifes.
Everything will be held by a social project called Project Metamorfose subsidized by public or privates entities which will be responsible for a transformation in slums by massively building new houses with the slums habitants.
In the end, the owner of the house helped by the Project will be responsible by instaling the eletricals and the pipes. 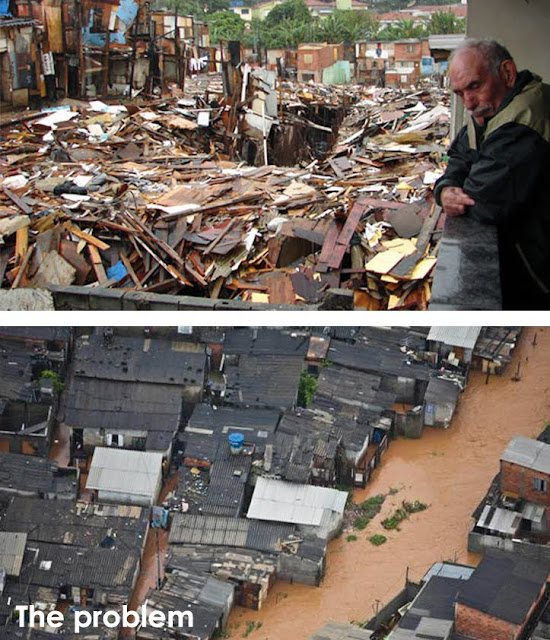 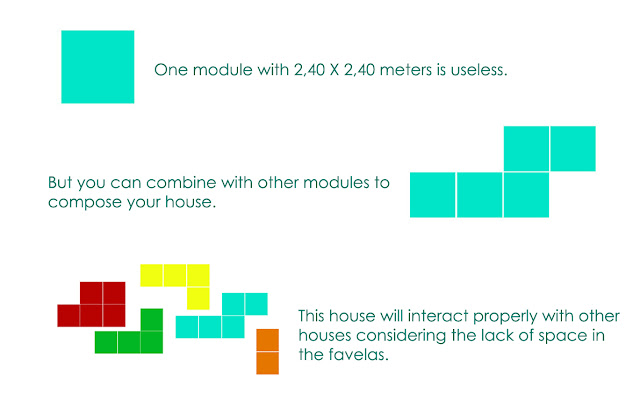 This interaction between the houses materializes the aspects of the relations between the habitants from slums. 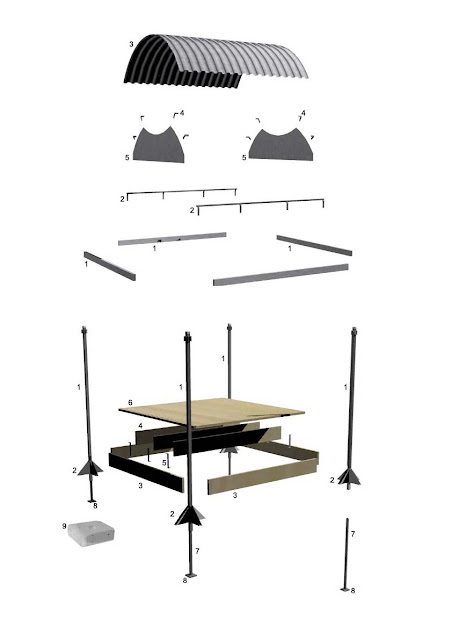 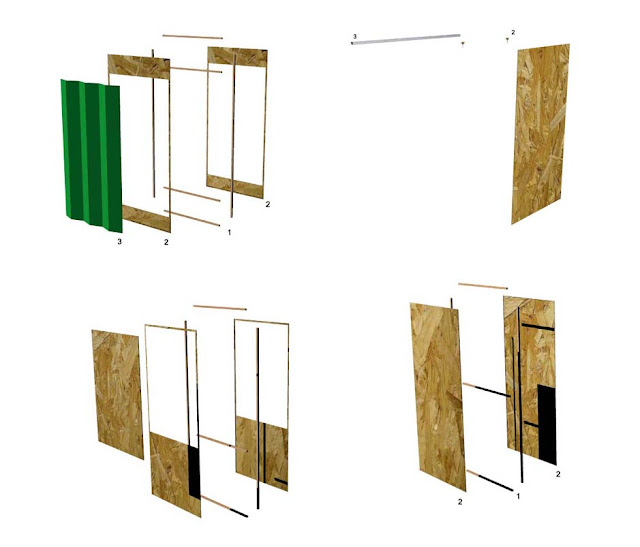 There are 4 types of OSB walls. 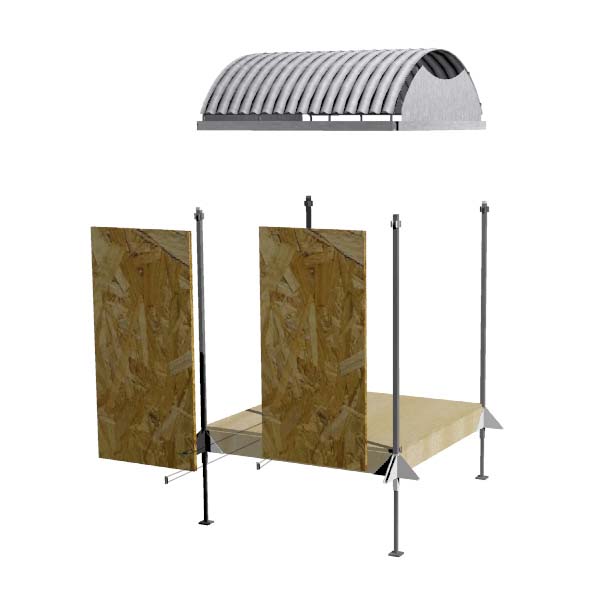 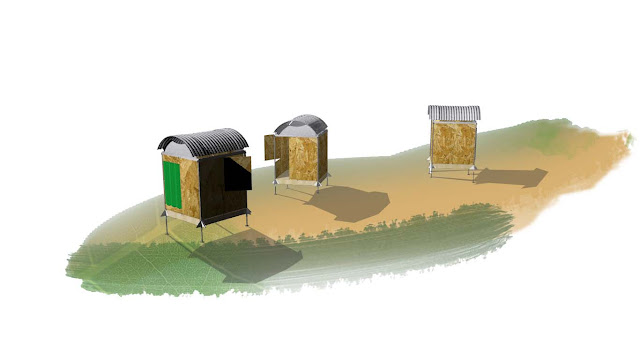 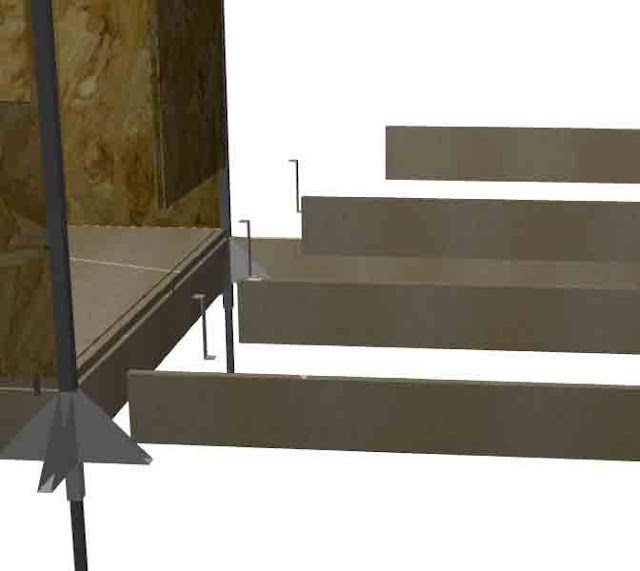 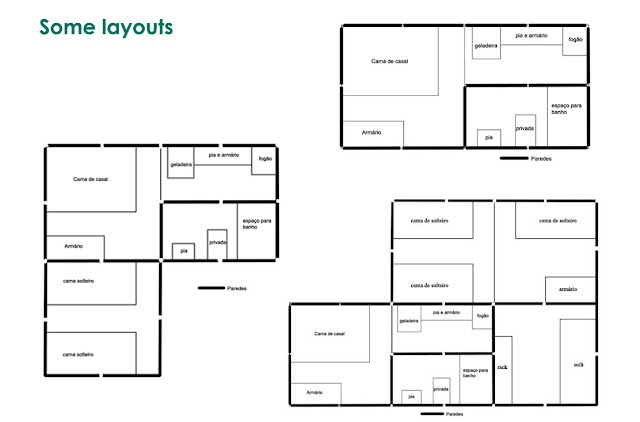 Examples of layout of houses with 2, 3 and 5 modules.

Inside a house with 4 modules. 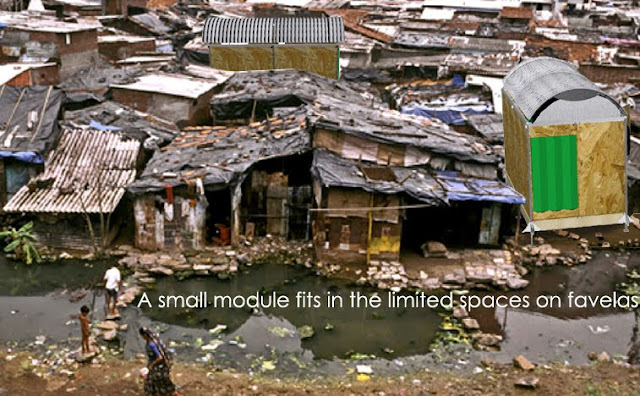 Massive transformation on the Slum.